As recently as last summer, U.S. Department of the Interior reported to Congress that “we have not seen any impacts to groundwater as a result of hydraulic fracturing.” In May 2011, EPA administrator Lisa Jackson told the U.S. Senate that she wasn’t aware “of any proven case where the fracing process itself affected water.” Letters from dozens of state environmental agencies – offices that have been regulating the fracturing process for decades — also confirm the safety of the technology. 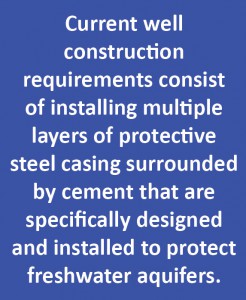 How is this achieved?

The Ground Water Protection Council issued a report in April 2009 stating that the potential for hydraulic  fracturing in deep shale natural gas and oil wells to impact  groundwater is extremely remote, as low as one in 200 million.  More recently, the U. S. Department of Energy just completed a 12 month study in the Marcellus Shale.  On July 19, 2013, the Associated Press reported as follows:

“Drilling fluids tagged with unique markers were injected more than 8,000 feet below the surface, but were not detected in a monitoring zone 3,000 feet higher. That means the potentially dangerous substances stayed about a mile away from drinking water supplies.

Eight new Marcellus Shale horizontal wells were monitored seismically and one was injected with four different man-made tracers at different stages of the fracking process, which involves setting off small explosions to break the rock apart. The scientists also monitored a separate series of older gas wells that are about 3,000 feet above the Marcellus to see if the fracking fluid reached up to them.”

Texland recently conducted a micro-seismic study of a hydraulic fracturing job in Andrews County.  During a frac job on a horizontal well, seismic equipment was lowered in a nearby vertical well to “listen” for cracking rock.  The study showed that fractures stayed within 50 feet of the intended zone which is approximately one mile below the surface.  Impermeable rock barriers above the formation prevent the transmission of fluid closer to the surface.